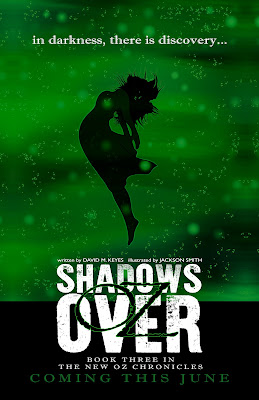 Writing for the third book in "The New Oz Chronicles" has officially concluded, and now the task falls to two editors and an illustrator to bring the remaining touches to the book in order to make it ready for release. Based on the timelines available with contributors, we project a release around the second week of June!

Why not a specific release date? Because "Shadows Over Oz," much like its two predecessors, is published on-demand, which means it goes live on the moment that the author deems it ready. That is a variable based on many factors, including unforeseen circumstances or more speedy results of what is intended. For example, though the release of "The Black Rainbow of Oz" was planned for May of last year, all the materials were completed and finalized by April 13th, meaning it was ready to go live that night for purchase. And physical copies began arriving at doorsteps two or three days after that!

Does that mean the new one might be done early? It's possible. It is also possible it might take an extra week or two. As we get closer to finalizing, there will be a better idea of what the schedule looks like, and you can stay tuned to newozchronicles.com or any of our social media links for news as it develops.

For now, feast your eyes on the official poster, and stay tuned for more promo in the days leading up to its public release. "Shadows Over Oz" will be released in Digital, Paperback and Hardback editions simultaneously!