The Cover Art for "The Black Rainbow of Oz" 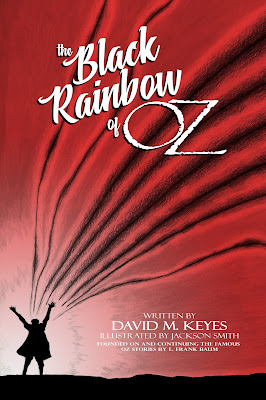 Attached here is the final cover design for "The Black Rainbow of Oz," the second in a proposed series of new Oz novels penned by David M. Keyes. The artwork, illustrated again by Jackson Smith, depicts one of the story's primary villains -- Nikidik, the Crooked Wizard -- releasing the might of the legendary black bow in an explosive display. This time, the concept was inspired by the Del Rey paperback cover for "The Magic of Oz," which depicted the Wizard of Oz in a similar pose standing in front of his own magical incantation. Baum's book, one of the best of the series, also contained the last known appearance of the Leopard King of Gugu, who returns in this new story with his own score to settle.
"The Black Rainbow of Oz" is currently slated for release in early spring.