The Art Style for "A Nightmare in Oz" 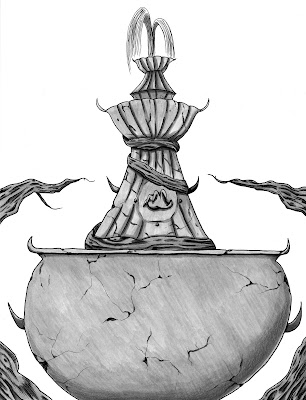 So many artistic concepts have been utilized for the famous characters of Oz that there remains an ambiguity in sensing the dynamic of their physical world. That was one of the first thought processes going into designing the artwork for "A Nightmare in Oz," which is a story primarily about the visions those characters experience rather than their own personal quirks or behavior patterns. To steer this idea in the story's visual, David Keyes, the writer, found a kinship in Jackson Smith, a self-taught sketch artist working out of Portland Oregon, who created a canvas of striking images to propel the menacing nature of the story forward. "I was imagining what scared me as a child," Jackson indicates as he was preparing his portfolio for the book. "One of those things was a faceless form in the shadows. And from there I moved towards the horror movie/sinister nightmare vibe."

The illustrated content of the book -- much of which has been previewed here and on Instagram -- deals almost exclusively with the visions conjured by the nightmares themselves. These include twisted versions of what we currently know as famous landmarks (including the above image, showing the Forbidden Fountain as it is caught in the Nightmare's tendrils), as well as newer visions, like the twisted white tree or the beast that is on the book's front cover. These are all fragments of a portrait that by and large sets the tone for what the famous citizens of Oz will face as they progress out of their whimsical routines and towards a frightening destiny.

The only image involving a character in this portfolio is that of the Prideful Panther, the newest cast member to Oz; it was necessary to visualize him and his environment, primarily, because of what he will come to mean in this next generation of Oz stories.

There are, of course, some more illustrations yet to be revealed. Stay tuned as we continue to dive through the visual aesthetic that comes with "A Nightmare in Oz," due to be released on April 6th in Paperback and Digital.